I stayed at our hotel last night and its now Sunday Morning. Its a little overcast today and we’ve had rain off and on for the last day or so. I opened my hotel drapes this morning and decided to take a photo with my cell phone camera of several of the views that our guests see when they wake up. I wish it had been a sunnier day but even these views are better than the typical view that you see from many of the downtown hotels in Chicago. An example of that is also below. That picture is typical you only see other hotel rooms facing you or it could be worse you could be facing the garbage cans in the back alley!

I’ve also put a link in here to our new Flickr Page with some great pics of some of the art thats in the neighborhood. Some of it is architecture some of it sculptures. Either way there are some great things to look at when you stay at the Chicago Lake Shore Hotel. Getting just 5 minutes away from downtown lets you see a whole new side of the city.

Here’s one of the photo’s I took nearby 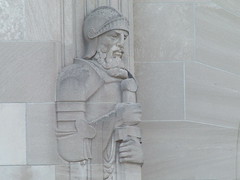 I just met three ladies that were staying here for a conference. Barbara, Linda and Jane got in a little personal time while they were here by escaping the conference and having our driver John take them downtown to the museum.
They came back later on and told me about their adventures downtown and they couldn’t thank me enough for giving them directions to some of the sights and sounds of Chicago. These girls from Minnesota needed to escape the winter coldness that engulfs that great state of theirs. I guess our warm hearted staff melted that coldness away! At least I hope it did! They said they are coming back again this summer. Ok, thats all for now I’ve got a bunch of Italian doctors (about 25 of them) staying here for a medical convention that want to talk to me.

Hope to see you here soon!