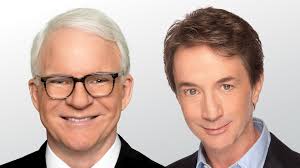 Get thee to Chicago to see Steve Martin and Martin Short in concert at the Chicago Theatre Oct. 6-7, and stay at the nearby and affordable Chicago Lake Shore Hotel!

Funnymen Steve Martin and Martin Short, two thirds of “The Three Amigos,” are the best comedy duo of our time. This tour, called “An Evening You Will Forget for the Rest of Your Lives,” features the boys doing standup, improv, having conversations about show biz and showing film clips, and given that the Steep Canyon Raiders are on the bill, surely a Steve Martin banjo will appear!

Steve Martin began his career as a writer on “The Smothers Brothers Comedy Hour.” He became a regular and favorite of Johnny Carson on “The Tonight Show.” He has won an Emmy, a Grammy, and an Oscar for his work. He has written memoir, screen plays and plays. Martin Short broke in with “SCTV,” a Canadian import and one the funniest shows of all time. In the 80s, Short was a mainstay at “Saturday Night Live.” He has won Tony Awards for his Broadway acting and singing

The Chicago Theatre is located at 175 North State Street in the heart of the Loop. For tickets and times, go online to http://www.thechicagotheatre.com/tickets/box-office.html and follow the prompts.